A magnificent view across the Black Sea from a sunny rooftop terrace in Odessa – it’s hard to imagine a more beautiful location for a blockchain conference. Guests and speakers from more than 20 countries were at the fifth Blockchain Incredible Party, BIP001, a leading cryptocurrency and blockchain event in eastern Europe. The event started only two years ago but has already built up a following who keep coming back for the friendly atmosphere, line up of international speakers and emphasis on social events put together with a hospitable touch. 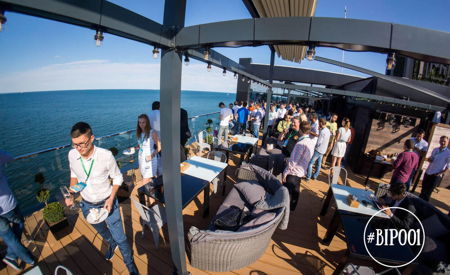 Lilia Vershinina and Pavel Kravchenko, the organisers and founders, say Ukraine is fertile ground for blockchain start-ups because there is funding, a pool of talented developers and a general appetite for new business ideas. "There are a lot of people trying to experiment, and they are not afraid," said Pavel.

The event aims to showcase the Ukrainian scene and strengthen ties between blockchain advocates in Ukraine and the west, he says, pointing out that they are a long way from Silicon Valley. Another goal is providing education for the enthusiastic and fast-growing Ukrainian blockchain community. Speakers at the sold out conference included Vlad Zamfir, developer at Ethereum, Giacomo Zucco, CEO at BlockchainLAB, Rob Viglione, co-founder of ZenCash, and Pavel Kravchenko, co-founder at DistributedLab.

Charles Hoskinson, CEO of IOHK, took to the stage to talk about the biggest challenge that he sees facing cryptocurrencies.

He drew a sobering comparison between what he said was a current cryptocurrency bubble, and the early period of the 20th century. Tracing an arc from the Knickbocker crisis of 1907, when a three-week financial panic crashed the US stock market, to the founding of the Securities Exchange Commission in 1934, Charles charted the excesses of capitalism that ravaged the economy during those years. From insider trading scandals to the novice investors who ploughed their savings into badly judged investments, the financial turmoil of that era took the US to the verge of bankruptcy and triggered the Great Depression.

Comparing then to now, Charles said: "We are in a bubble and there will be a collapse. A lot of businesses will wash away; the strong will survive. Moving beyond that we either repeat history and create another Federal Reserve, or we can ask ourselves, 'what can we put into code?'"   "That is the ultimate challenge we face as a space. If we are successful, not only do you create something much better, more transparent, and efficient – it will be a global system. That is my hope for what cryptocurrencies can achieve. If we can get there scams will disappear, and there will be an expectation that things will work the way they ought to, as opposed to today."

Other speakers also tackled the growing trend of ICOs, or looked at the issue of regulation.

Also at the conference was Professor Roman Oliynykov, part of the IOHK Veritas team, which is based in Ukraine. Set up in 2016, the six-person team conducts due diligence, research and development in the area of cryptocurrencies. He summed up the local interest in the subject:

"In my city, Kharkiv, there were more than 1,000 registrations for the last Bitcoin meet-up, which would have been unimaginable only six months ago. There is a huge popularity of blockchain systems in Ukraine and there are many qualified professionals for scientific research into blockchains."

A main focus for the Veritas team has been research into treasury systems. This mechanism provides a pool of funding for the development of cryptocurrencies and allows communities, rather than single individuals or entities, to vote on the decisions that determine the future of a cryptocurrency.

Roman said: "Researchers at Lancaster University in the UK in collaboration with the Veritas team have almost finished a new voting protocol for a treasury, which provides privacy in voting, yet in a transparent process. It also provides delegation. Moreover, we can find out how popular each expert is, how many people are delegated to each expert, but the delegation itself remains private."

An expert as referenced in this case is a person trusted by the community. Some people will prefer to delegate their vote to experts.

For the organisers of BIP, an expanded programme is being planned for the next event. Pavel is looking at the possibility of a week-long conference that could include courses too. That would be great news for the loyal fans of this well put together event.